Now here is a company thinking outside the box , Yikebike created a 1.2KW motor powered carbon fiber bike which also folds down in 15 seconds.. have a look at their Videos here. Pretty sick and also helps our environment! With a deposit of €100.00 from your credit card you can secure one here. The total price of the YikeBike is expected to be between €3,500 and €3,900. 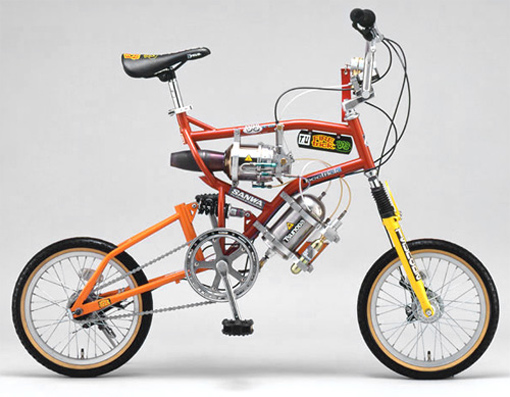 The BMX bike’s heyday may have ended back in the 80’s, but Rintendo has found a way to make me want one again. They’re currently selling this little contraption known as the Fire Trick Bob which appears to be an actual rocket-powered bicycle. According to their site (Google translation) the turbine engine spins at a rate of 120,000 RPM and produces the equivalent of 4.4 horsepower. The 1 liter fuel tank is good for about 7 minutes of continual thrust, and you’ll probably want to be careful about where you’re riding this thing since the exhaust can reach about 700 degrees. So is it dangerous? Yes. But is it worth 1,000,000 Yen or about $10,000? Double yes!