French artist ZEVS was arrested in Hong Kong this morning, July 13th, 2009 at 3:49am after Liquidating the Chanel logo on the façade of Chater House in Central.
Read the news and watch the video HERE 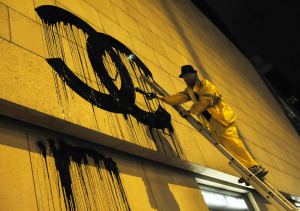 French graffiti artist Zevs – known for “liquidating” famous logos by pouring paint over them – was arrested early yesterday after a Chanel logo on the façade of a Central building received the same treatment.
He was one of three people arrested in connection with the incident at Chater House about 3.30 am. Police did not name the three, saying only that they were a 32-year-old Western visitor and two Hong Kong residents aged 27 and 26.

Dominique Perregaux, owner of Arts Statements Gallery, who invited Zevs, confirmed he had been arrested. VIDEO AFTER THE JUMP.

A police spokeswoman said a man called the emergency hotline shortly before 3.30am after he saw a man get out of a light goods vehicle parked near the building and paint graffiti on the wall. “Police went to the scene after receiving the call. Officers found the vehicle and arrested three men inside for alleged vandalism,” the spokeswoman said.

Speaking from Singapore, Mr Perregaux said his assistants called him about 4am. “They were with Zevs. I have not been able to reach them since. I am trying to get hold of them.”

Mr Perregaux said he did not understand why police had arrested the artist. “I do not think it is a big deal. After all, he has performed such art forms in many places before, in Berlin, in New York and Paris,” he said, adding that Zevs had used water paint, which could easily be removed.